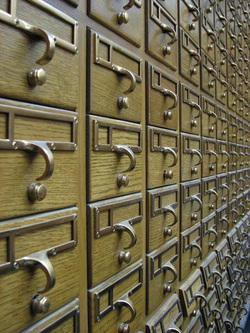 image from Creative Commons by haaaley
I began as the Curator of Visual Resources at Cornish College of the Arts in 2002.  When I began in this position, Cornish offered only slides for their faculty to use in the classroom.  Now, the college is completely digital.  However, this is not to say that we have divested ourselves of the slides!  On occasion, faculty like to use them in the classroom for specific projects and the students like to use them for creating works that involve the use of distorted scale and other manipulations of the image.  For these purposes, I also maintain a few slide projectors and other 'old technology' such as a 40+ year old opaque projector and even an overhead projector.  One never knows what an artist might like to use in their creative process.

After working in this part-time position for several years, I was approached by the Director of the Library to see if I might be interested in working on the reference desk.  I replied that I was interested, but that I would want to get my MLIS in order to do so.  She enthusiastically said she would support my decision to return to school (her plan all along perhaps?) and was very supportive as I juggled school and work schedules.  Now that I have my MLIS, my position developed into that of a full-time Visual Arts Librarian with responsibilities in instruction and reference as well as in image and archives curation. In June 202, I became the Director of LIbrary Services.

At Cornish we subscribe to ARTstor and I make in-house digital images that I share with users through ARTstor's Shared Shelf.  I initially used MDID as our digital asset management program until my IT department told me they would no longer be able to support MDID. Undaunted, I was able to garner support and funding to enable Cornish to use the Shared Shelf program within ARTstor.  I now feel that the lack of IT support for MDID was fortuitous in that it enabled me to push for Shared Shelf which exists within a platform already familiar to my patrons. For the move to Shared Shelf, I developed and created the fields that would enable my patrons to locate the images they need, including developing a specialized costume collection for a large collection of costume images that get used frequently by the Performance Production department. In developing these fields, I had to ensure that they would map to the metadata currently in use within the in-house database of 45,000 slides - many of which that I am digitizing (though not all - we don't need multiple copies of the Mona Lisa, after all!).